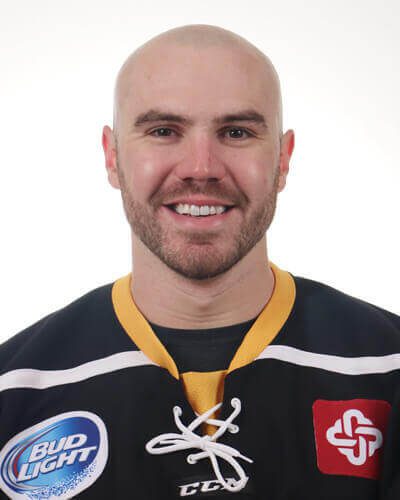 "This product has allowed me to continue to play at the level I believe I can."

In July of 2017, Krampade and Clarke Saunders entered into a long-term endorsement agreement.

Clarke Saunders, a native of Brockville, Ontario, was a standout goal tender for the University of North Dakota men's ice hockey team from 2012-2014. He transferred to UND after playing two seasons with the University of Alabama-Huntsville where he appeared in 46 games. A highlight game at UAH earned him the USCHO.com number one Star of the Week for making 58 saves in a 2-1 OT victory against University of Nebraska, Omaha. As a sophomore he led the NCAA in saves per game, averaging 34 stops. At UND, his junior season produced careers highs in every category, including a 0.917 save percentage, and 2.30 goals against average. That season, his UND debut was a 21 save road victory shutout against Alaska-Anchorage. As a senior, his net time was limited but he posted 2.93 goals against average and a 0.914 save percentage in 11 starts. He played three seasons for the Colorado Eagles of the East Coast Hockey League from 2014-2017. His combined record is 64-20-5, with his best season in 2016-2017 when he posted a 28-7-1 record with a 2.60 goal against average, a 0.913 save percentage, and he had 4 points all on assists. He ended the season with the San Jose Barracuda of the American Hockey League where he posted a 1-1 record. Expectations are that Clarke will continue his rise up into the AHL and continue to elevate his game. Clarke is playing the 2017-2018 season in the Alps League for HDD Jesenice where he currently has a GAA of 1.95 and a save percentage of 94%. Good luck in the second half of the season!